Veterinarians Are Embracing The Benefits of Airlite Bedding Aime Johnson, DVM, DACT, Associate Professor, Theriogenology (Reproduction) at Auburn University College of Veterinary Medicine, has made the change to Airlite bedding. A healthy and eco-friendly cardboard bedding providing a healthy and sanitary environment for equines and other animals,the benefits on many levels have been changing the way farms are being managed.

“We use Airlite bedding exclusively for all of our foaling mares. Previously we had used straw or a combination of straw and shavings. We found Airlite far superior to either of these other types of bedding. The Airlite does an excellent job at absorbing fluids especially around the time of foaling. The fluids associated with the birthing process can make the stall floor slippery for the foal’s first attempt to stand. Airlite does a spectacular job absorbing these fluids rapidly, thus making the stall floor safe for the foal.

Additionally, Airlite is superior for foals who spend a lot of time laying on the bedding. It is less dusty and therefore better for young lungs. It absorbs urine well, and does not cause harm to the foal’s eyes that can be a concern with standard shavings.

In speaking to our cleaning crew, they found it much easier to clean than the straw.

We use Airlite for all our standard and high risk foaling mares and newborn foals.”

Scott Swerdlin veterinarian and President of Palm Beach Equine and his wife Amy tried a multitude of ways to manage Amy's successful dressage horse Quileute chronic cough. "After trying all types of bedding, including ground-up diapers and pellets, she was delighted to find that a relatively new product, Airlite Animal Bedding, worked wonders. “The very next day his coughing was already down,” she says. “It’s made such
an amazing difference.”

After extensive research, Dr. Laurent Couetil of Purdue University noted there are two main approaches that can help reduce exposure of the horse’s airways to respirable particles:

The 1st approach is to use feedstuff and bedding that generate low dust and endotoxin concentrations. The 2nd approach is to increase removal of airborne particles and noxious gases by improving ventilation in the building.

The Science of Straw vs Airlite vs Bedding

Colorado State University Department of Animal Science's study of cardboard versus sawdust as bedding for horses concluded that "cardboard bedding was more absorbent, had a cleaner appearance and had lower aerial ammonia levels than the sawdust bedding." 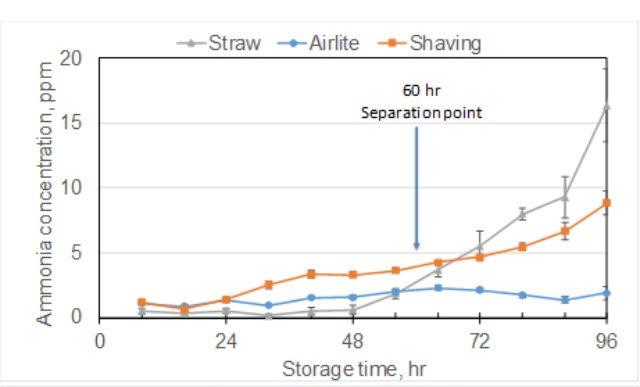